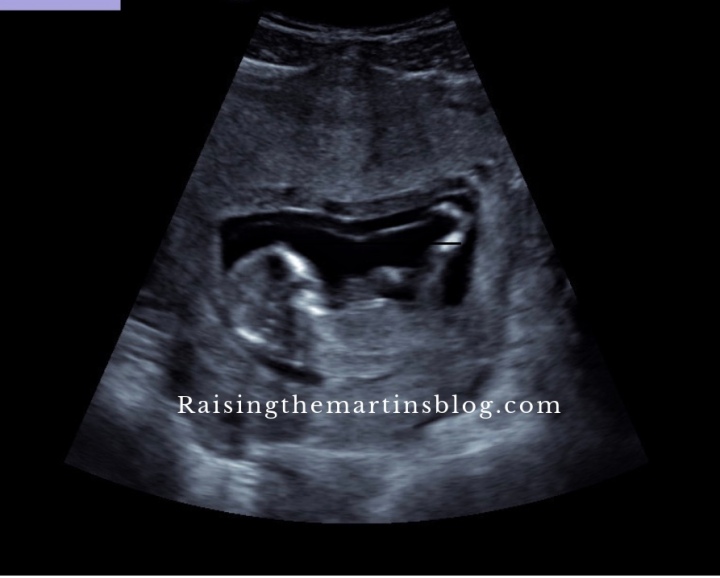 I’ve been really quiet over this way for a bit, and decided it was time for an update. Back in August on my youngest daughter’s 4th birthday I found out some exciting news! Earlier in the day I was feeling really nauseous, and I had some light cramping. I remember feeling really dizzy and for a faint second it popped in my head to grab a test.

However, the night before I had a few drinks with our neighbors. I’m an occasional wine drinker, but last night my husband and kids went over to the neighbors to hang out. While the kids played upstairs we had drinks and played games. So the next day I figured it was just the effects of the drinks. I still kept getting this nudge to take a test. Later that night I went to Wal-Mart to get a test, while feeling extremely guilty for having those drinks the night before. Once I got home I was a little nervous but the second line popped up so lightly I almost didn’t believe it!

I ran and told my husband, and he couldn’t believe it either. To be honest the first thing that hit me was fear of hyperemesis. Hyperemesis robs you of so much, and I hate that in that first moment instead of joy I was overtaken with fear. The fear of that mixed with regret on the drinks I had. Then my heart began to race at the excitement of adding a fifth baby to our crew.

The next few weeks were like being in a fog. At just 4 weeks I was in the emergency department getting iv fluids. The throwing up constantly took over, and I couldn’t keep anything down, not even water!

I explained to the kids that mommy was really sick, but the baby in my belly was okay. I was still on seasonal break from work in the hospital, so looking back I see that as a blessing. I was able to rest like I needed without the shuffle of working my 12hr shifts in between throwing up. Actually there was probably no way I could work in those early weeks.

Once I started going back to work, I was mentally and physically exhausted. We were also in the process of house hunting. We needed more space than our duplex has, and an actual yard especially with a large dog now part of our family + a baby on the way. I remember throwing up in between viewing houses, and getting our hopes up. I was drained and feeling so defeated.

I found myself questioning God, in the midst of the waiting, closed doors, and hospital visits. It was a dark isolating place to be.

I was too ashamed to reach out, because I didn’t want to seem like I was taking being pregnant, and having a roof over our heads for granted. But if I could go back, I would have let all those emotions out instead of holding them in. I spent nights in the er in tears getting fluids, while my husband kept the kids at home. I felt so drained and isolated. I posted a Facebook status about how finding a house would never work for us (dramatic I know). But I didn’t mention anything about the pregnancy, it was exciting news but I was just extremely sick and didn’t want to announce yet.

At work the next day a friend mentioned my house post and that she knew of a house. She even knew the owner! I tried not to get too excited, because I had been disappointed so many times. I contacted the owner and our conversation sounded really promising! My friend from work also put in a good reference for me, and once we met the owner it was set!

It’s amazing how God works. This was ALL God ordained.  I’ve dreamed of a place like this for years. A quiet subdivision, where we can walk and the kids can ride bikes. More space, plus a bonus room upstairs for a playroom, and a fenced in yard! The first thing the kids were drawn to was the the large yard with a swing set. The scene of them swinging and playing made me emotional. This is what I’ve dreamed of. 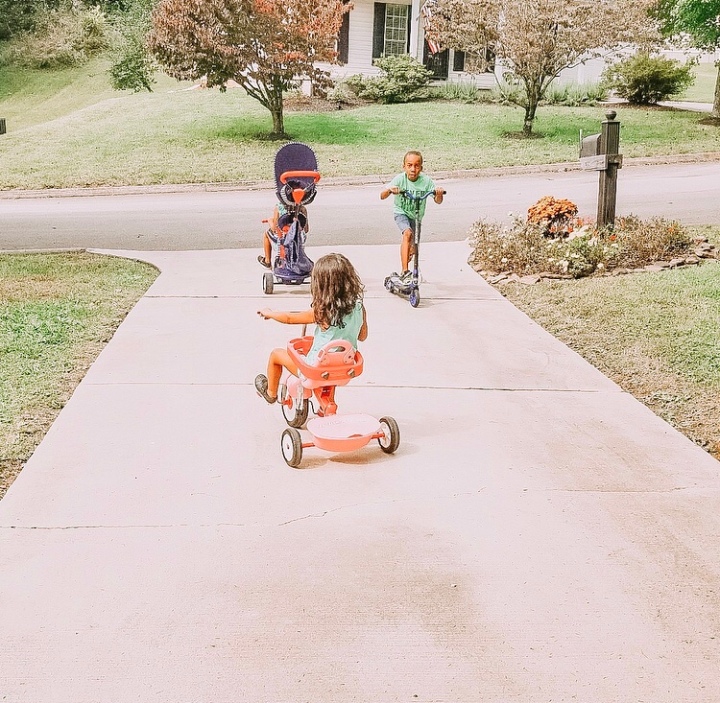 We’ve rented an apartment, a condo, and then a 3 bed duplex. We’ve never had a yard of our own, or extra space. This isn’t to talk badly about any of that, this has simply been a long dream for our family.

I could tell you to keep the faith when you’re praying the same prayer over and over, I could tell you that I did. But that would be a lie. The disappointments left me feeling hopeless. For years I’ve prayed and cried while reminding myself to be thankful for a roof over my head. We are renting, but so many people reached out to me about how hard and stressful it was for their families buying a home. So in an essence either way it’s hard when you are searching, longing, and praying.

I’ve questioned my faith seeing it happen for everyone else. I’ve longed for mornings on the porch and evenings in the backyard on the deck watching the kids play. Like the good ole days at my mom’s house. Then I remember how long and hard it was for my mom to buy that house. How she was so proud and how we’d sit on the porch swing just grateful. I suppose in the waiting it has made me even more grateful. I realize these desires may sound silly, but as a big family+ a dog, we’ve needed more space and a yard.

I won’t downplay the duplex we were in, we simply outgrew it, and lived on an extremely busy street with no sidewalks. In those five years memories were made. Two new lives were welcomed and grew in that home, we found out about baby #5 there. Birthdays were celebrated, family came for Christmas each year+ Thanksgiving. There was so much growth and love.

And in the end that’s all that truly matters is that no matter where you are, you’re surrounded by love. Your tribe.

We’ve been packing things here and there and decluttering like crazy, and I must say it feels so good! We started our big move this past weekend. Our neighbors helped us tremendously.  The guys used his truck to move the big things, and the wife watched the kids. I stayed at the new house unloading small things, and putting them away. I can’t thank them enough for all they have done, and using their truck for the move helped us so much!

We slept in our new home Sunday, although we still have a few big things to get from our old place. It just felt so good waking up in our new home together. I never really understood the whole “it takes a village” thing, but now I know more than ever that it does. Good neighbors are hard to come by and I’m going to miss being next to them. Our kids have played together so much, and we’ve always been able to hang out and have a good time with them.

The nausea and vomiting has started to kind of level out. I’ve been on every nausea medication possible, I’ve tried every “remedy.” But hyperemesis isn’t something that saltine crackers and small sips of ginger-ale can help. This time around thankfully I haven’t had to go to the iv infusion center weekly, but some days are still harder than others. I am 15 weeks now, and there is a definite bump which is exciting.

We confirmed the gender a few weeks ago. I have already known now for weeks. Call me crazy but at work one night around 8 weeks God spoke to me with a name. A really special name that is tweaked and derived from a Biblical name. It all suddenly came to me with no thought, that’s how I knew it was special.  The name and person from the Bible ties into us finally finding a house and all my emotions ( I will explain that all in another post).

As a huge act of faith, that night after work I went out to Wal-Mart and purchased something for the baby. A lot of people said they were so sure they were carrying something other than what they had expected. It was hard to explain that I just knew it in my heart.

I had blood work done that also includes the gender, and I never got the results for the gender, but thankfully everything else came back good. So at my 13 week ultrasound I mentioned it to the tech and she said, “I’m pretty sure the results for that is also in your chart I saw it!” My heart started racing, when she confirmed what I already knew.

With tears in my eyes I looked over at my little man sitting in his stroller fumbling with his sippy cup, completely clueless to what was going on. I was beyond ecstatic, thanking God in my head. Later when my husband got off I surprised him and the kids with sweets to show the gender. I recorded a video as I asked everyone what color they thought, and then when they opened the box everyone jumped with excitement. It was such a joyous intimate moment. One that I will cherish forever, especially on the days when I can barely keep anything down.

All this to say, if you’re in the waiting just know God IS behind the scenes working in your favor. And should you find yourself doubting, don’t hold it back. Shout it out, cry it out to God, just let it out. He can handle it and He’s on your side. Like a chess game, He’s meticulously working behind the scenes. Your big check mate is coming.  I now know that all the disappointments, and dead ends, led us here to this house for our soon to be family of 7 +1 wild weimaraner! We are home!

“Trust in the LORD with all your heart, and do not lean on your own understanding.  In all your ways acknowledge him, and he will make straight your paths.” -Proverbs 3:5-6

I just want to start by saying I am so grateful that you are here. I was born and raised in the south, and sweet tea is my jam. I’m married to my best friend. We recently welcomed baby number 5 in April! I never saw myself having a big family but, I couldn’t be more grateful for this life. They are all around 2 years apart, plus we have hyperactive weimaraner! So my days are loud, and chaotic in the best way possible. I do photography occasionally, work part time seasonal in an E.R, consume way too much iced coffee, and I’m a huge grace enthusiast!
Did I mention that I love writing? I believe in sharing our stories, because that’s where the connection and healing starts. It is my biggest passion to encourage others through my own stories. I don’t have all the answers, fashion or beauty tips. But what I do have is a deep burning passion in my soul. I want to; encourage, uplift, and inspire others to see and live life through the lens of grace. And laugh a little, because sometimes you just need either a good laugh or cry. I hope you will pull up a chair, kick back, and join me. There’s always a seat at the table for you here! For more encouragement and daily posts you can find me here. -With Love, Jasmine 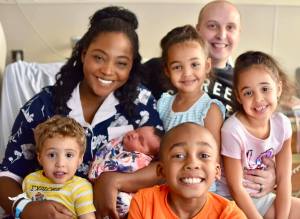